Is there a Connection Between Genius and Art?

I believe there is a connection between Art and genius as I shared in last week’s post.  Go HERE if you missed it.  I got so fascinated with researching geniuses since my inspired art connection with Lyn Lasneski and her art exercises and perspective on Creativity!  You should check out her free FB group iCreateGenius.  I want to share with you about specific examples of geniuses and creative thinking and Art in the next few weeks.  If creative thinking CAN be developed then we can become more genius in our lives to creatively see the world with new possibilities to solve  the world’s problems.  Who will be known for the Corona Virus breakthrough?

The first genius we will look at is remembered for his remarkable breakthroughs in the cause and prevention of disease.  Any ideas?  He is Louis Pasteur who was born in France of a poor tanner.  Did you know he was an average student?  Or that his interests were fishing and drawing?  He drew portraits for his family, friends, and neighbors.  In an article found in sciencehistory.org it was said that he was considered “more artistic than academic.”  He managed to pass to earn a general science degree in college and later a master’s degree.  When Louis began his research and experiments, his trained observation skills led him to amazing discoveries.

In his experiments studying fowl cholera, he left the cultures unattended while on vacation.  When he returned, he continued the same procedures but with a different result.  The chickens did not become diseased….  He was then “inspired” with an idea that made no rational sense or based upon any prior scientific or medical knowledge.  He just followed this “inspiration”, a “What if I did this – What would happen?” idea.  He inoculated the chicken with the virulent culture.  The result?  The chickens survived and were protected from the disease!  Thinking “outside the box” opened the door for new discoveries outside the realm of knowledge of his day.

I found it interesting as well, that his experiments came out of questions and problems of his world that needed a solution.
1.  The problem of the souring of milk, beer, and wine resulted in his discovery of bacteria, what it was,
and how to stop it by boiling then cooling, which is now known as pasteurization.
2.  The problem of silk worms dying and the affect on the silk industry.  He discover that
microbes were attacking healthy silk worm eggs and causing disease and death.
He developed a method to prevent their contamination which became used by silk producers
around the world and save the industry.
3.  The problem of disease and death led to his discovery of germs and his work with cholera
with chickens in which he discovered a way to inoculate to prevent disease.

Drawing and painting are learned skills that can teach us to use our right brain to see and think visually.  These skills developed in Art transfer to other areas in one’s life and helps us to see other options to problems, even when those ideas may not “make sense” to the practical, rational left brain.

Encourage your kids or grand kids to do Art!  Daily!
HERE is a little activity and video inspiration with art and gratefulness for you and for your kids by Melody Ross.
You will not only have fun, develop your communication skills with the visual, but also your creative thinking skills to solve problems will grow!  I wonder what genius will develop the cure for the Corona virus?

In the meantime, we are seeing lots of creative thinking going on as we deal with new problems to be solved due to the impact of the virus on our lives.  Here are some of my observations:
– A “Birthday Party Parade” for a little boy of his friends and family parading by in their cars with balloons and gifts and singing “Happy Birthday!”
– Eggs and flour left on the step of a friend with lots of kids.
– People supporting their local businesses by purchasing gift certificates to be used later to help them make it through this time.
– People supporting their hairdressers and nail salons by continuing to pay them regularly even when they are not able to service them.
– Lots and lots of creative play with the kids is going on at home.
– Time for relationships within the immediate family is being taken in meal preparation, conversation, and play.
– Busy schedules are reduced to allow for no more excuses or procrastination to do those creative projects we always want to do, or take the on-line course, read the book, or clean out the closet, etc.

HERE is a link to Bill Johnson’s sermon/podcast that I found so positive and encouraging to keep our perspective and to live creatively and with love and care for one another.

I encourage you to open your eyes to creative possibilities during this time! 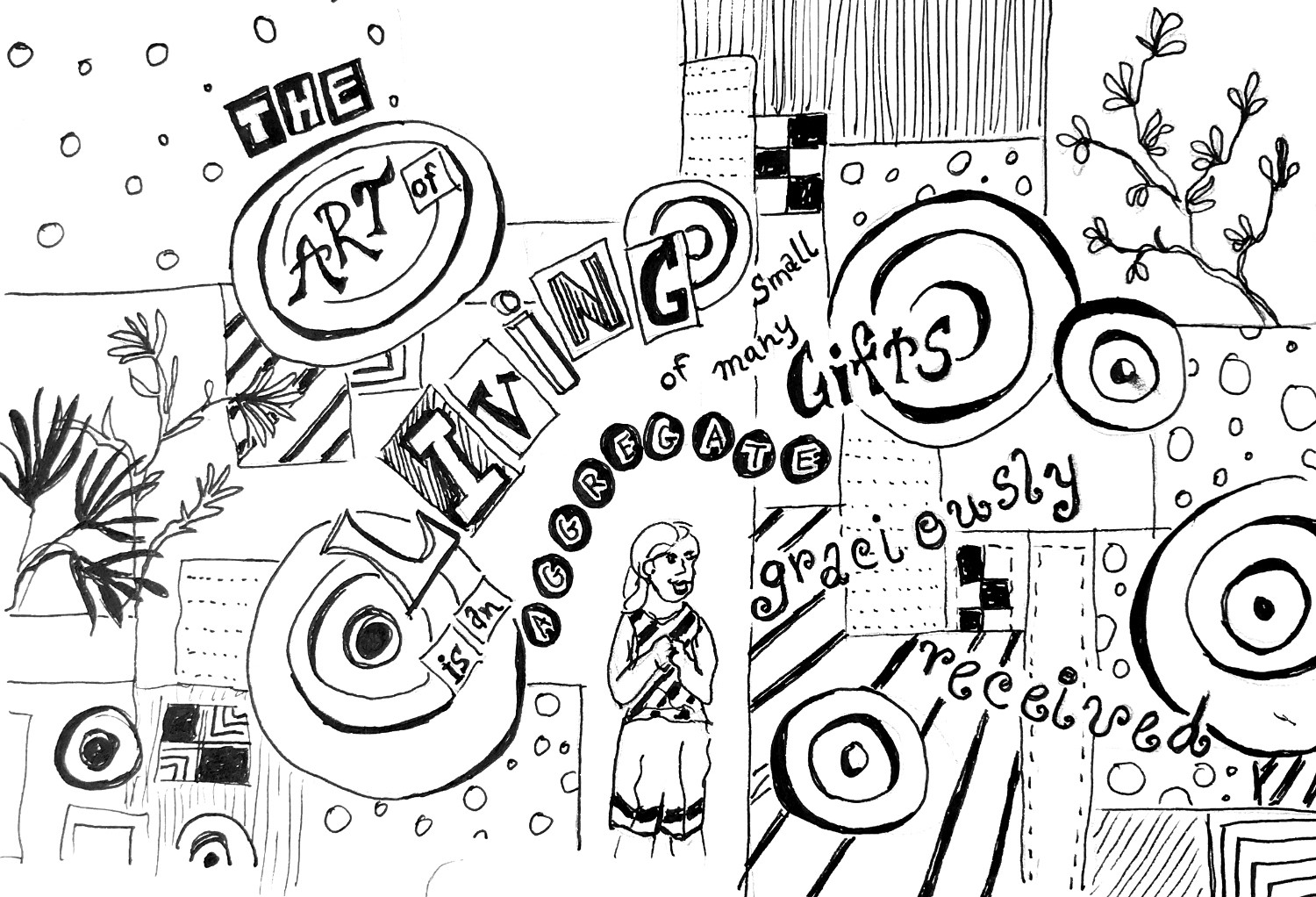 “All I have seen teaches me to trust the creator for all I have not seen.”

The Play and Pray retreat was just what the “Great Physician” ordered.  It’s been a while since I have been able to work with so many different mediums.  The choices were almost overwhelming.  Being creative is good medicine and I have always felt close to God when I get those creative juices flowing.  All the components were there for a truly creative AND spiritual experience such as the privacy of a natural surrounding, a menagerie of art mediums and supplies , prayer, healthy food, and n… END_OF_DOCUMENT_TOKEN_TO_BE_REPLACED