I absolutely have to share about one more creative thinker!  This one may surprise you!!  He is the only US President with a patent.  Who do you think?………….. 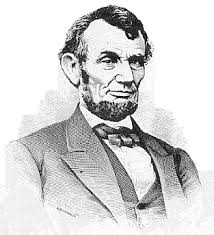 Abraham Lincoln!!  Abraham Lincoln was an artistic creative, visual thinker.  He had an interest in engineering and mechanics.  He grew up with a farming background and loved to design and invent new objects to improve the efficiency of labor.

Abraham Lincoln also boated along the rivers of the Midwest as an adolescent.  He explored the Ohio and Mississippi rivers.  He worked on several cargo ships. His skills and ability to see creative solutions kept a boat run aground on a shallow from capsizing.  This interest to solve this common river navigation problem continued to be fueled until he came up with a solution.  He invented a device for lifting boats off of sandbars or obstructions.  As a congressman, he worked between sessions at a nearby mechanics shop to make a model of his invention.  He was awarded a patent in 1849.  (He was disappointed that it was never manufactured.)  Later in life, he expressed the belief that more people might be inspired to invent solutions to their problems if they could have exclusive rights to their design for a period of time after completion.

Abraham Lincoln also applied his creative thinking skills, the ability to see more than one solution to a problem as he served as the President of the United States.  In “Abraham Lincoln” by James M. McPherson, he records that one such time was one month after Lincoln took office, the Confederate leaders demanded withdrawal of the federal garrison from Fort Sumter in Charleston Harbor.  The Secretary of State and several cabinet members urged the President to give in to their demands to try to preserve the peace and dissuade other slave states from following South Carolina’s lead in seceding.

Lincoln had a dilemma:
!.  Withdrawal from the fort would show weakness and might encourage foreign countries to recognize the Confederacy as an independent nation.

2.  Or by sending a shipload of US troops to shoot their way in to reinforce the garrison at Sumter, Lincoln would be blamed by many in the North for choosing to start a bloody conflict.

3.  President Lincoln hit upon an ingenious/creative solution.  Instead of sending troops, he would send only provisions – “food for hungry men.”
He sent a message of assurance to the governor of South Carolina that “if such attempt be not resisted, no effort to throw in men, arms or ammunition would be made.”

Of course, Lincoln was aware that Jefferson Davis could not accept that seemingly peaceful gesture of sending only food, because that would appear to cede sovereignty of the port to the Union.  So Davis ordered Southern guns to fire, thereby suffering the blame for starting a war.

Lincoln figured out a solution to help keep the European nations from recognizing the Confederacy but also united the divided North.

YOU are created AMAZING!!
Develop your ability to SEE!  Draw.

These are Clematis blooming by my porch.  Draw!  It doesn’t have to be a masterpiece.  And if you feel so inclined, splash a little paint! 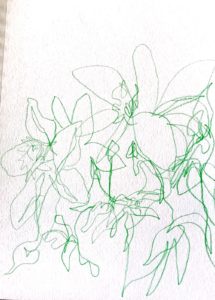 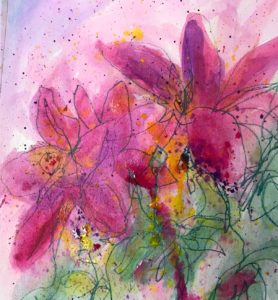 The Play and Pray retreat was just what the “Great Physician” ordered.  It’s been a while since I have been able to work with so many different mediums.  The choices were almost overwhelming.  Being creative is good medicine and I have always felt close to God when I get those creative juices flowing.  All the components were there for a truly creative AND spiritual experience such as the privacy of a natural surrounding, a menagerie of art mediums and supplies , prayer, healthy food, and n… END_OF_DOCUMENT_TOKEN_TO_BE_REPLACED